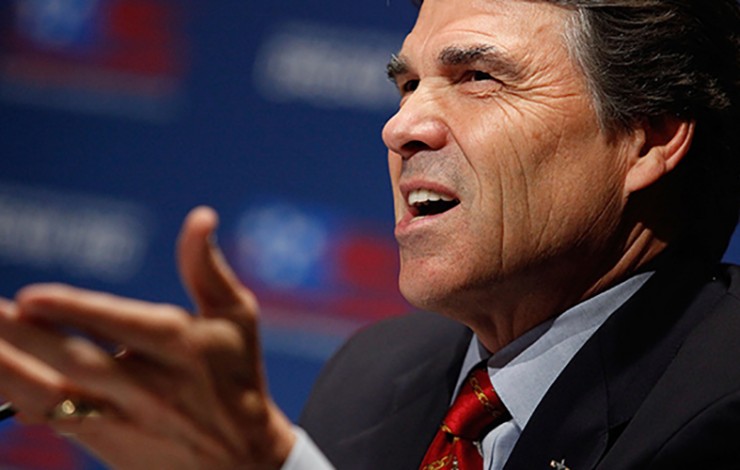 He was widely panned for it, but former Texas Gov. Rick Perry, who recently joined the crowded field of Republican presidential contenders, became the first – and so far, only – member of that group that has tied the recent Charleston, S.C., shootings to Big Pharma.

In an appearance on NewsmaxTV's Steve Malzberg Show, Perry made the claim that the killing of nine African American worshippers by avowed white supremacist Dylann Roof was caused by mind-altering drugs.

In response to a question by Malzberg regarding whether he thought the shootings were an act of terrorism, Perry noted, "I don't know, but I think the facts, once we get them – there were more people than that killed in Paris," he said, a reference to the attacks by Islamic terrorists on the offices of satire magazine Charlie Hebdo. "This was a crime of hate – we know that."

"The VA is handing out these opioids"

Perry continued: "It seems to me, again without having all the details about this, that these individuals have been medicated and there may be a real issue in this country from the standpoint of these drugs and how they're used."

He went on to point out that mood-and-mind-altering psychotropic drugs have been at the center of virtually all mass shootings in the U.S. since the Columbine school shootings in the late 1990s

Perry also noted that "the Veterans Administration, for instance, is handing out these opioids in massive amounts. And then people question: 'Well, why can't these young individuals get work?' Or, 'Why is the suicide rate so high?'"

During the interview, Perry also lashed out at President Barack Obama for politicizing the killings.

"This is the [modus operandi] of this administration, any time there is an accident like this," Perry said. "The president is clear, he doesn't like for Americans to have guns and so he uses every opportunity, this being another one, to basically go parrot that message.

"So, I mean, there are a lot of issues here underlying this that I think we as a country need to have a conversation about," Perry concluded, "rather than just the knee-jerk reaction of saying, you know, if we can just take all the guns away this won't happen," he said.

He went on to say as well that he was not advocating any specific policy change in reaction to the shootings, but he was adamant about the drug connection, as others have been.

Perry, we should also note, may be sounding a little duplicitous on this issue. You may recall that, in February 2007, while still governor of Texas, "issued an executive order that bypassed the will of the Texas people and the entire legislature, mandating the vaccination of young girls -- in Grade 6 in Texas -- with the HPV vaccine Gardasil," as Christina Luisa reported in 2011.

"Merck, the pharmaceutical company in charge of the villainous venture and the chief distributor of the vaccine, was the same drug company that was reported to have given thousands of dollars to Perry's campaign efforts," Luisa wrote at the time for Natural News.

Still, the connection between Big Pharma psychotropic medications and mass shootings cannot be denied – or ignored. In the case of the Charleston killings, the suspect – Dylann Roof – was arrested a few months before carrying non-prescribed suboxone, a medication approved by the FDA for the treatment of opioid dependence such as heroin addiction.